Neocortical circuits are organized with remarkably similar features across areas and species. These features include a common laminar structure with generalizable cell classes as well as similar local connectivity and input and output connectivity patterns. We have harnessed this generalization into HNN’s foundational neural model that is provided as a template circuit to work with. 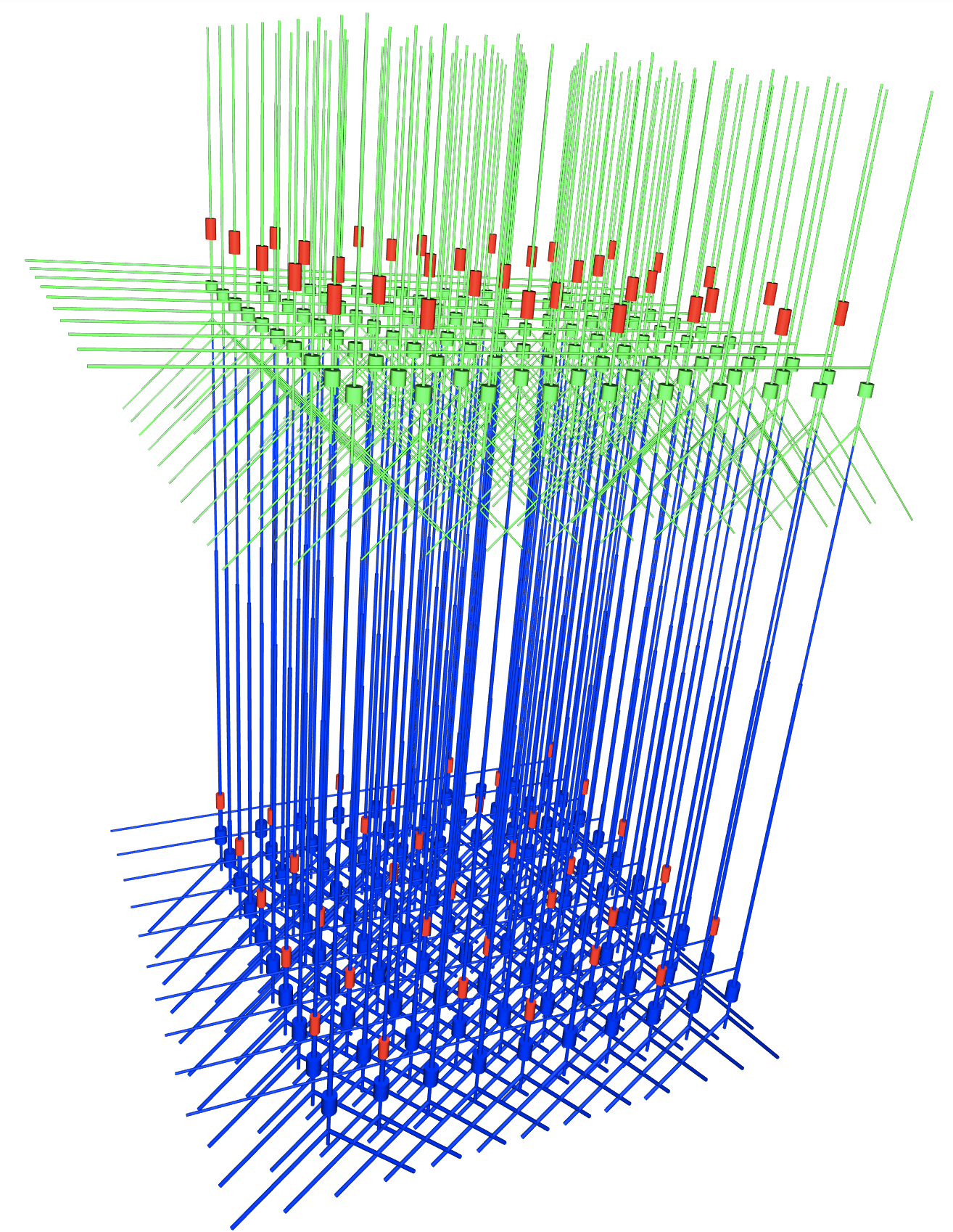 Most importantly, our model contains multi-compartment pyramidal neurons (PN) in supragranular and infragranular layers (layers 2/3 and 5, respectively), whose apical dendrites are spatially aligned and span the cortical layers as shown in the 3D visualization above. The primary electrical current signals simulated in HNN are derived from the intracellular current flow in the PN dendrites (see Calculation of Primary Electrical Currents tab for details). In the figure above, the green neurons represent the layer 2/3 PN and the blue the the layer 5 PN. Note that in both layers, the PN have two basal, one oblique, and one apical dendrite branch, and the layer 2/3 PN have shorter apical dendrites compared to the layer 5 PN.

The PN are synaptically coupled to each other and to a subset of inhibitory neurons in each layer in a 3/1 PN-to-interneuron ratio. The inhibitory neurons are simulated with single compartments and represent fast spiking basket cells, and are shown in red in the figure above. Details of the cells and synaptic connectivity structure are given under their respective tabs in the “Under The Hood” page.

There are several ways to activate the local cortical column with layer specific synaptic (thalamo-cortical, and/or cortical-cortical) and tonic drive, as detailed in the Exogenous Driving Inputs and Tonic/Noisy Inputs tabs (see also tutorials).

The list below provides an overview of key features of the template model provided, further details are outlined in other tabs in the “Under the Hood” page.

Of note, the granular layer is not explicitly included in the template circuit. This initial design choice was based on the fact that macroscale current dipoles are dominated by PN activity in supragranular, and intragranular layers. Thalamic input to granular layers is presumed to propagate directly to basal and oblique dendrites of PN in layer 2/3 and 5 (see Exogenous Driving Inputs tab for details). As the use of our open-source software grows, we hope that other cells and network configurations will be made available as template models to work with.